Panama (República de Panamá) is a Central American country bordered by Costa Rica and Colombia, and bisected by the famous Panama Canal. Panama has the Caribbean Sea to the north and the Pacific Ocean to the south, and the canal connects these two seas.

A significant portion of Panama’s GDP comes from canal tolls. Other important sectors are commerce, banking and tourism. 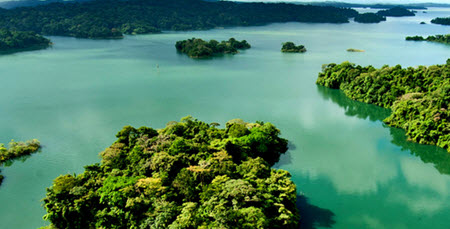 Many tourists visit Panama each year to enjoy the warm climate and explore the tropical landscape. Some of the plants and animals that live in Panama’s jungle are endemic to Panama and found nowhere else.

The interior of the land consists chiefly of steep, rugged mountains and dissected upland plains. Along both coasts, gently rolling hills and flat plains are common.

Roughly 40% of Panama’s land area is forested, but this number used to be considerably higher in the past – before widespread logging and farming. Still, there are many parts of the country were the rainforest goes all the way from the seaside mangrove swamps of one side to the lower reaches of the slopes of the other side.

Panama’s highest point is a volcano named Barú, which towers at 3,475 meters above sea level. (This is roughly equivalent to 11,400 feet.)

The infamous Darién Gap is a gap in the Pan American highway, a highway that except for this gap stretches from Alaska to Patagonia. The gap is located in the Panama – Colombia border region, where undeveloped swampland has made it practically and politically difficult to create a highway. On the Panamanian side, this region is dominated by mountains covered in thick rainforest. On the Colombian side, you’ll find the flat and marshy river delta of the Atrato River.

Located mostly between latitudes 7° and 10°N, Panama enjoys a tropical climate with high temperatures year round. Elevation will of course have an impact on the temperatures, and frosts do occur on the higher peaks of the Cordillera de Talamanca.

There is a dry season and a rainy season, but the likelihood for rainfall also varies between the different regions. Generally speaking, you can expect heavier rainfall on the Caribbean side of the country compared to the Pacific side. In some parts of the country, the rainy season is nine months long. In others, it will rarely last longer than six months.