Honduras capital Tegucigalpa is located in the southern-central highland region of the country, within the department of Francisco Morazán. The city is nestled within a valley, where 20th and 21st century urban sprawl has forced it to creep higher and higher up on the mountain sides.

The site where Tegucigalpa is today was originally a settlement where the Pech, Tolupans and Twahkas lived. In 1578, the invading Spaniards founded a mining town here and named is Real de Minas de San Miguel de Tegucigalpa. Today, the city is often referred to simply as Tegus or Téguz.

Tegucigalpa and Comayagüela are formally two cities, separated by the Choluteca River, but they are both part of the same metropolitan area and many Tegucigalpan residents do their shopping at the big market in Comayagüela.

Just like many other parts of Honduras, Tegucigalpa and Comayagüela are plagued by violent crimes – including murder, kidnappings, robberies and rapes. It is advisable to obtain up-to-date safety information prior to your arrival and heed the various recommendations, e.g. the recommendation to not walk in the city when its dark.

Things to do in Tegucigalpa 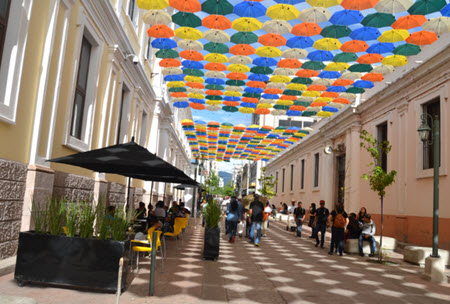 This is a museum where you can learn more about Honduran history and art through permanent and rotating exhibitions. Housed in a beautiful colonial-era building in downtown Tegucigalpa, Museo para la Identidad Nacional will take you from pre-historic and pre-columbian Honduras through colonial Honduras and into the modern independent era. Tip! Don’t miss the IMAX-style animated movie about the Maya civilization. The Maya civilization developed in an area that encompasses southeastern Mexico, all of Guatemala and Belize, and the western portions of Honduras and El Salvador.

Go for a walk in Parque el Picacho

Parque el Picacho is a park with an entrance fee (a few U.S. Dollars) but it’s well worth the cost since the park is well maintained, non-crowded and offers stunning views of the city. The name of the park comes from Cristo el Picacho – the huge Jesus statue that is a prominent landmark in Tegucigalpa.

This 16-block market is where many Tegucigalpan families make their necessary purchases and you can buy food, clothing, pottery, etc.

Walking around in the area around the market (not the market itself) is not recommended due to the high crime rate.

Things to do near Tegucigalpa

This is a beautiful cloud forest park northeast of Tegucigalpa, home to a wide range of plants and animals, including a lot of birds.

There are several well-marked paths for walking and hiking, and guides are available for hire (but are not mandatory). You’ll find more information at the visitor’s centres; there is one in Jutiapa in the south-west and one in El Rosario in the north-east.

If you want to spend the night, there is a camping ground at Jucuara where you pay a few U.S. Dollars per night. There is also a hotel in El Rosario.

Located roughly 40 km from Tegucigalpa, the town of Valle de Angeles (Valley of the Angels) offers a considerably more relaxed atmosphere than the hustling and bustling capital city. The pace of life is slower here; it’s a great location if you want to explore on foot and maybe spend a few hours soaking up the atmosphere in a family-owned restaurant while sampling local cuisine and downing a few Honduran beers.

Getting to Valle de Angeles from central Tegucigalpa on the rapido-bus takes approximately 45 minutes.

The approach to the airport is difficult even for skilled pilots, especially in bad weather. The mountains are close by and the runway is notoriously short. The History Channel program “Most Extreme Airports” ranked it as the second most dangerous airport in the world. For a long time, the runway was only 1,863 meters long, but it has now been extended to 2,021 meters.

TransNica have buses going to Tegucigalpa from San José, Costa Rica and Managua, Nicaragua. You can chose between standard trip and executive trip. For some of these buses, it is possible to get on the bus at other stops than the capital cities (e.g. Leon in Nicaragua).

TicaBus have buses going all the way from Mexico through Guatemala and to Honduras, with Tegucigalpa being a major stop. These bus routes continue from Tegucigalpa to El Salvador, Nicaragua, Costa Rica and Panama.

If you arrive to Tegucigalpa after dark, please be advised that it is not safe to walk to your lodgings. If you arrive to the Comayagüela area, walking around is considered unsafe even during daytime.

There is no railway to or within Tegucigalpa.